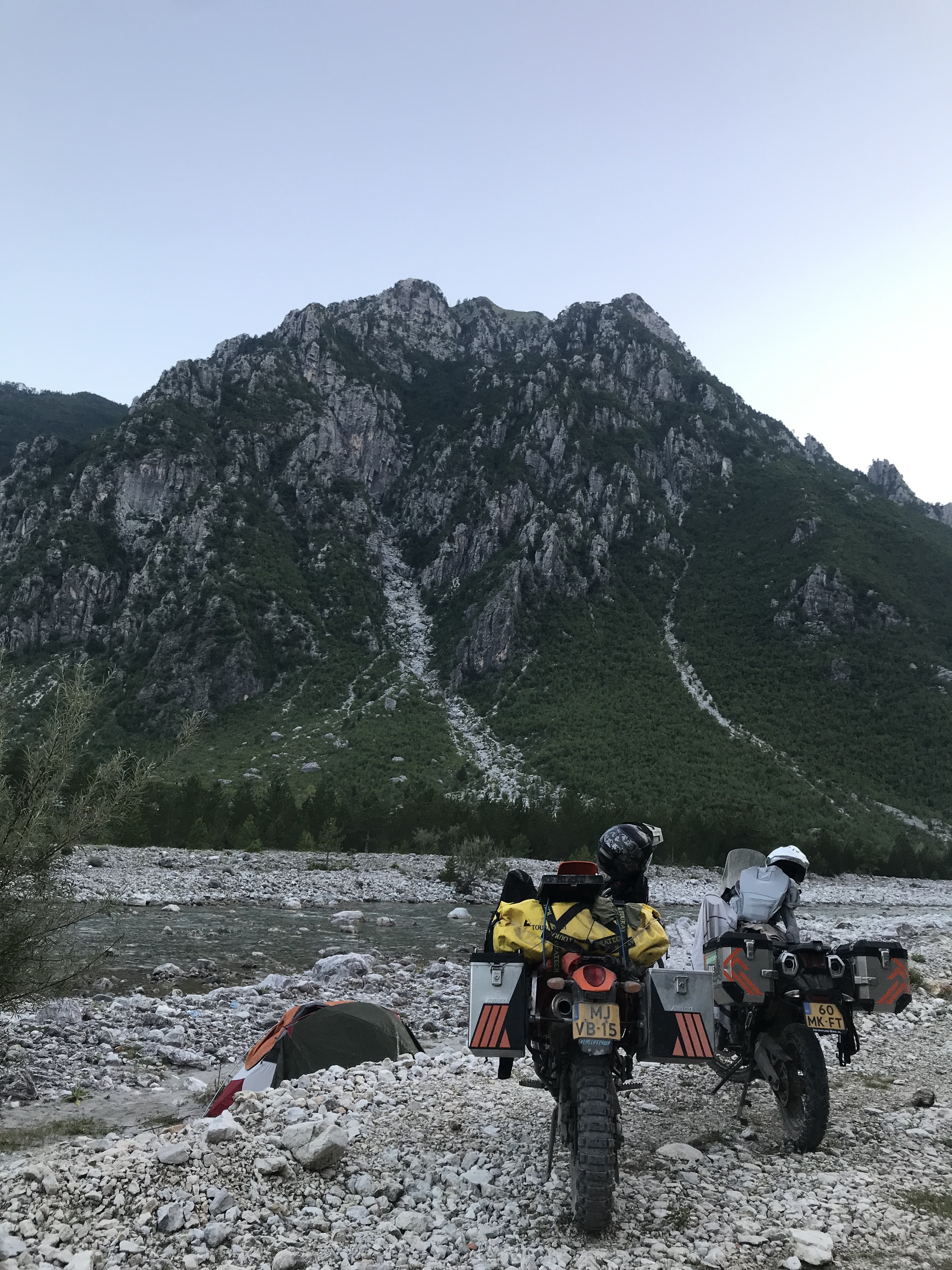 Two days back we drove into Greece. It wasn’t until the next morning that we realized we left the timezone of the Netherlands. We didn’t understand why we woke up that late (7:30, by all means, is ridiculously late!) until we saw the time on our dashboards: not the same as our iPhones quietly had shifted to. Time has been changing. The perception of it when you’re on the road is so much different from what it was back home. It feels like the hours and days are so much fuller. Like time is coming back to us, instead of rushing through our fingers. And it’s interesting to see that the world is gradually shifting too. Surprised as we were that the dogs are allowed to walk around free in France, here basically all animals can be found on the street (I always wonder how you’re able to find your horse or cow back when you need them, but this question remains yet unanswered). But this is not all that is changing. It is sad to witness the well arranged tidiness change into a non-arranged plastic soup. What are we doing to our world? Of course we contribute as much, maybe even more to it, than those in the countries in which the beaches are full of bottles and the sides of roads are filled with plastic bags. Yet witnessing these obvious results is confronting.

And I find it difficult to see that the world of equals already is becoming less and less equal. Clearly it has been men dominating in the countries we’ve past. Barely any women on the street. Is this the same Europe? How will this be in Iran, where women aren’t even allowed to get their motorcycle license? 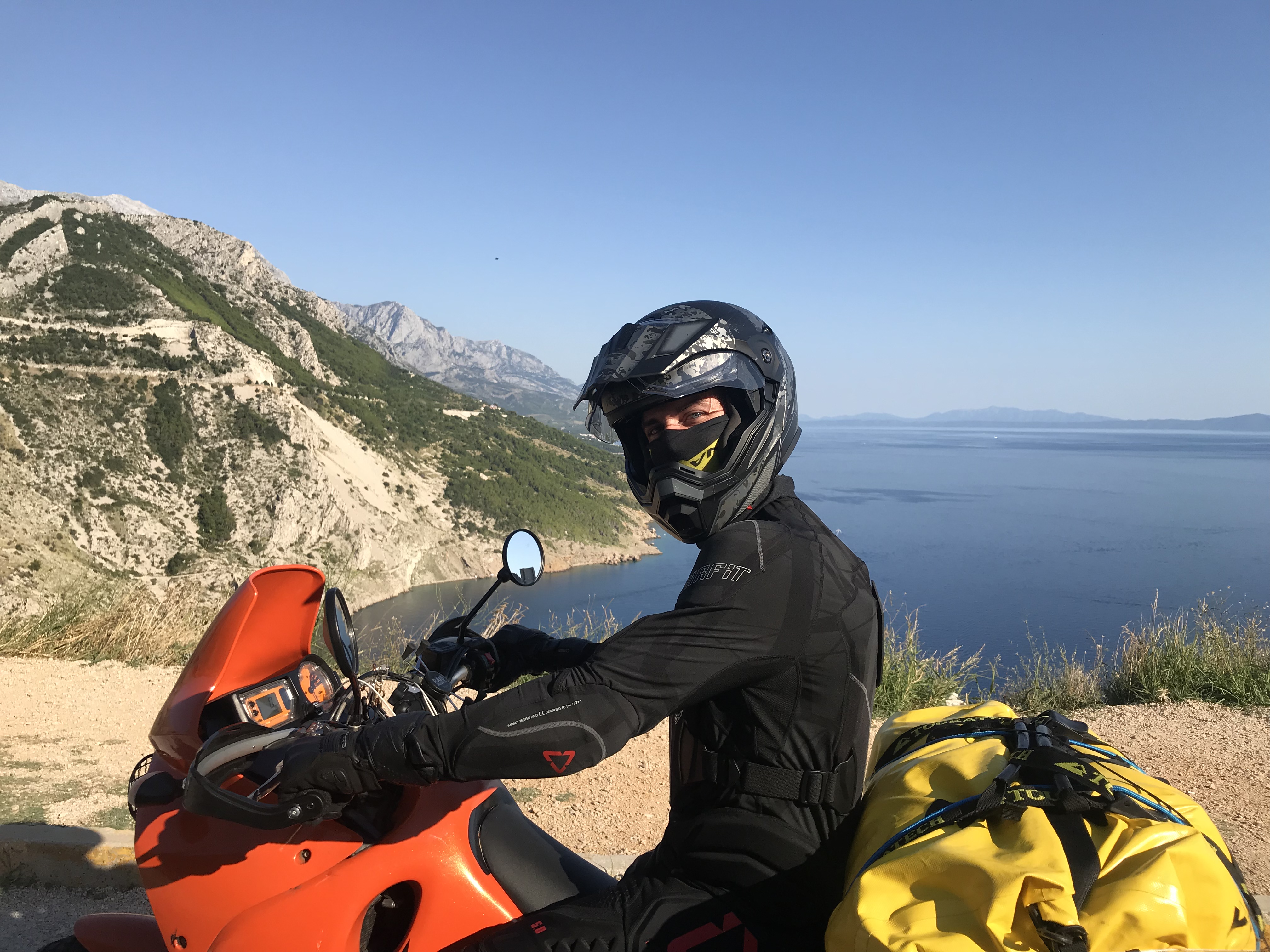 Yesterday it was a week ago that we left our safe little stopover in the south of Croatia. Honestly, that hotel room wasn’t the best for me anymore. I was getting all grumpy towards Ruben. I figured it was just about time to hit the road again, to feel those engines roaring again. Yet the coastline of Croatia wasn’t the best for me either. If you’ve ever been there you must be aware of the crazy amount of people that visit, well, everything, during the high season. Which is exactly now of course. All these barely covered, bulging and sunburned bodies that ALWAYS wanted to cross the streets in front of my bike couldn’t cheer my mood.

I expected that it would be quite impossible to find a place to pitch our tent without paying for it, or without simply being on the sideway. But Ruben has a special gift for this. As going down towards the sea wasn’t an option we went up, over a winding and little scary gravel road till we found a perfect place, overseeing this astonishing, deep blue Adriatic and some of the villages along it. For the first night we kept half of the rain-cover of our tent open. And how rich are we, to see the moon, stars and all those little lights from the comfort of our own perfect beds. 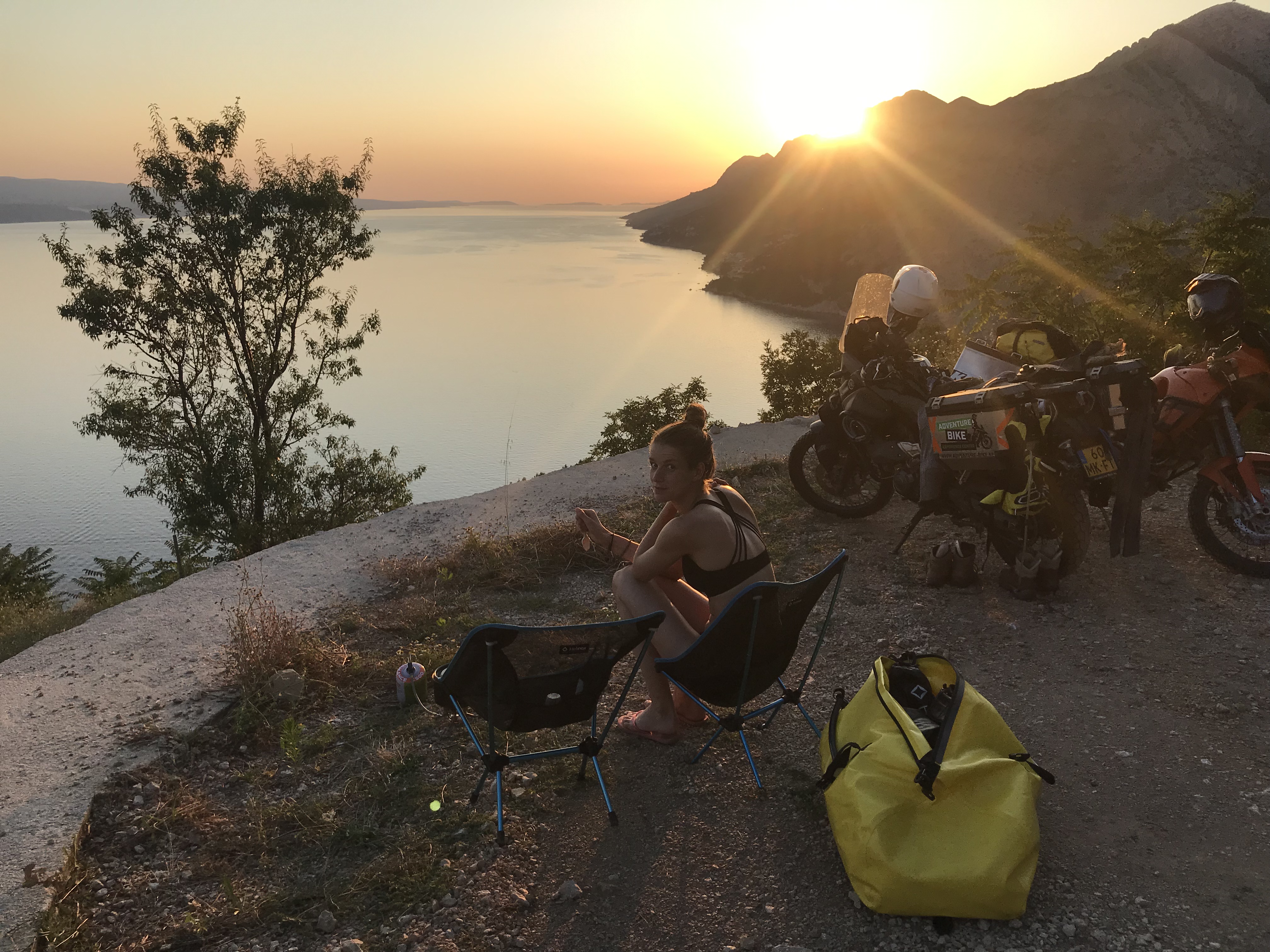 Montenegro was next on the list, and as I’ve paid a visit some years back my expectations of this country were up high. I remember it as remote, quiet, and with breathtaking nature. A relief after that craziness on the Croatian coast. But still following that same coastline might not have been the best idea. Or tourism has just been booming in this country, also an option. If possible, there were even more people in our way, literally. It was SO busy. To escape from traffic lines and places packed with people was among one of the reasons to leave the Netherlands. Didn’t work. But the truth should be told, the coastline was beautiful. Pale blue crystal clear water, black mountains rising behind it and small winding roads through lively green vegetation that led us through it. But all those people… We couldn’t handle it in 42 degrees Celsius. 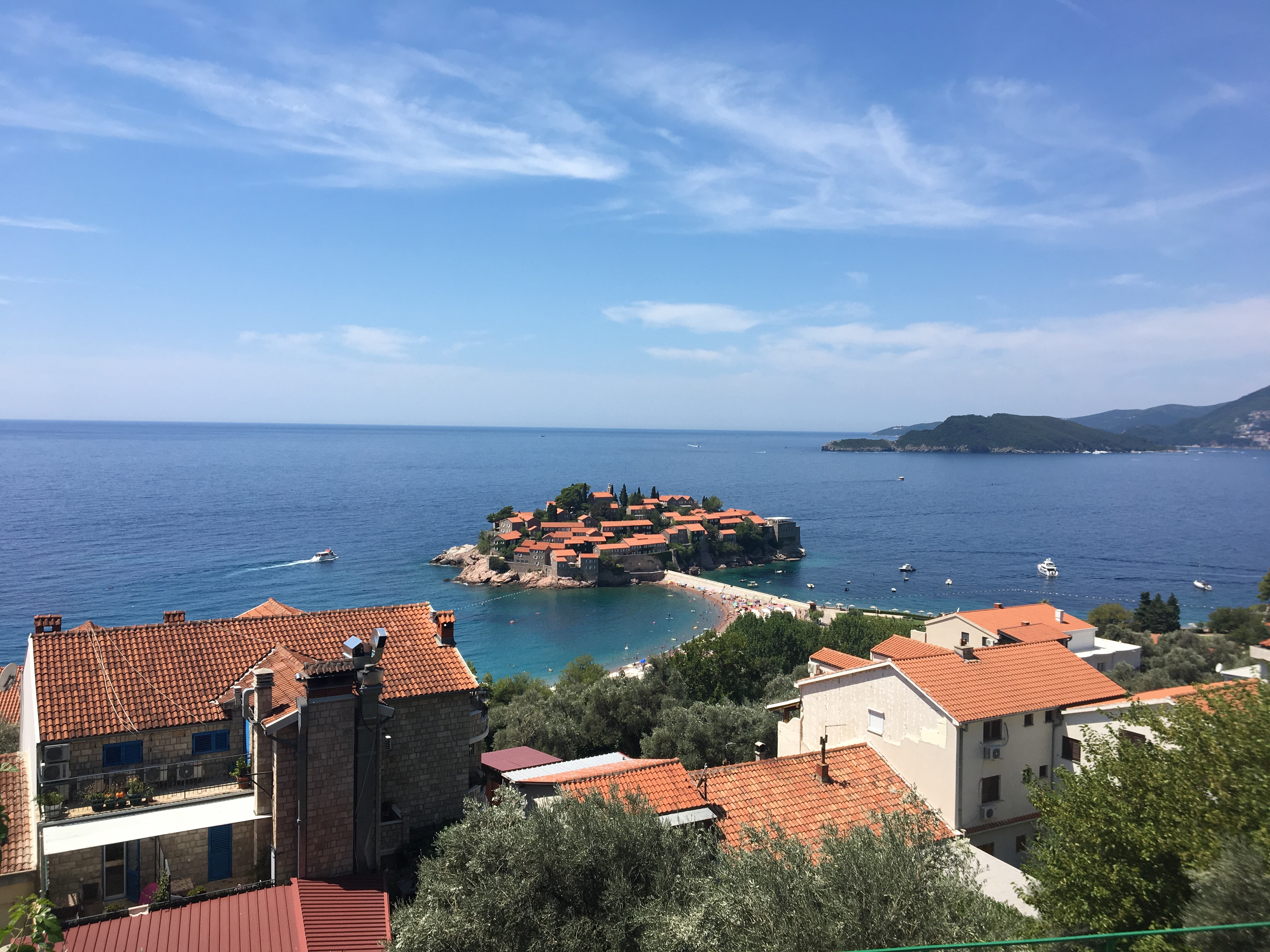 Ruben was a little scared of hitting an old mine, so we went land inward, to a lovely small campground close to a lake. First one on our trip, certainly not the last. I discovered here how remarkable it is that with people around me, and in a place where we’re allowed to be, I feel safe. I don’t even listen to the sounds around me when I want to go to sleep. Yet when we’re out somewhere camping in a place where it’s probably not allowed, but with no people around me, I’m so aware of every sound around our tent. It’s a conditioning, probably, to feel safe within walls and among other people, to be suspicious about everything that’s “out there”. But aren’t humans the most dangerous species of all? I for sure hope that, with my common sense still present, I loose some of that suspicion, that I get more connected with nature, that I truly learn to hear and understand her. 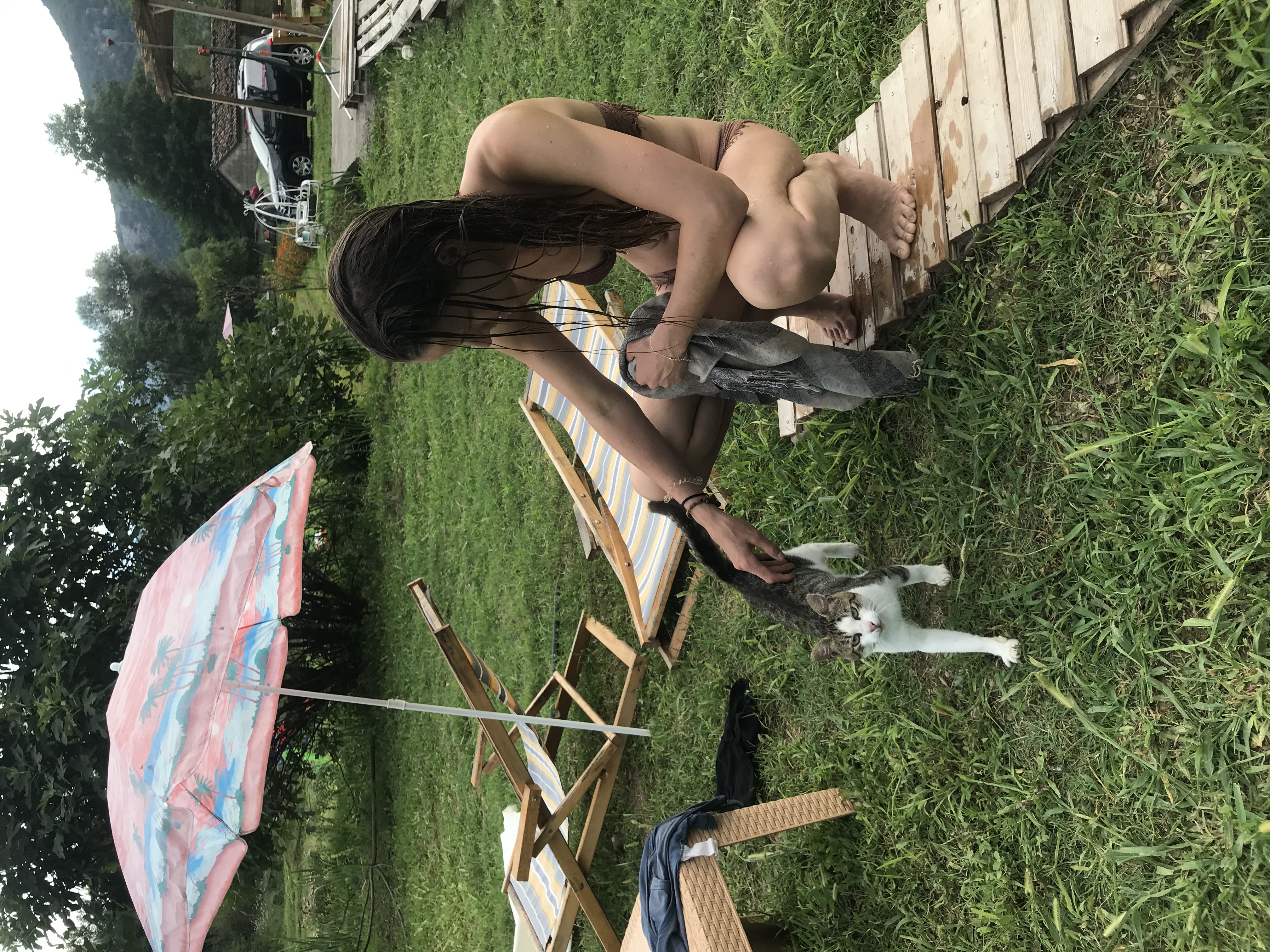 The road continued, and also Montenegro we left behind. We decided on a little detour through the mountains of Albania. With a bit of map-gazing we found a nice place called Theth, and of course some roads leading to and from it. Quite unaware of what was in front of us we left the main road. It was so lovely to see the mountains again, to feel the altitude rising, the air getting cooler. I used to hate mountains, because my dad always decided that holidays had to go there. And I hated it that I had the feeling I didn’t get any say in that. But my genes are clearly his. Now I’m a little older I see the astonishing beauty of it. How small those giants can make you feel. How they put everything in perspective. So I’m glad, that even when I wasn’t aware of it, my dad was the one that nourished this love of nature in me. 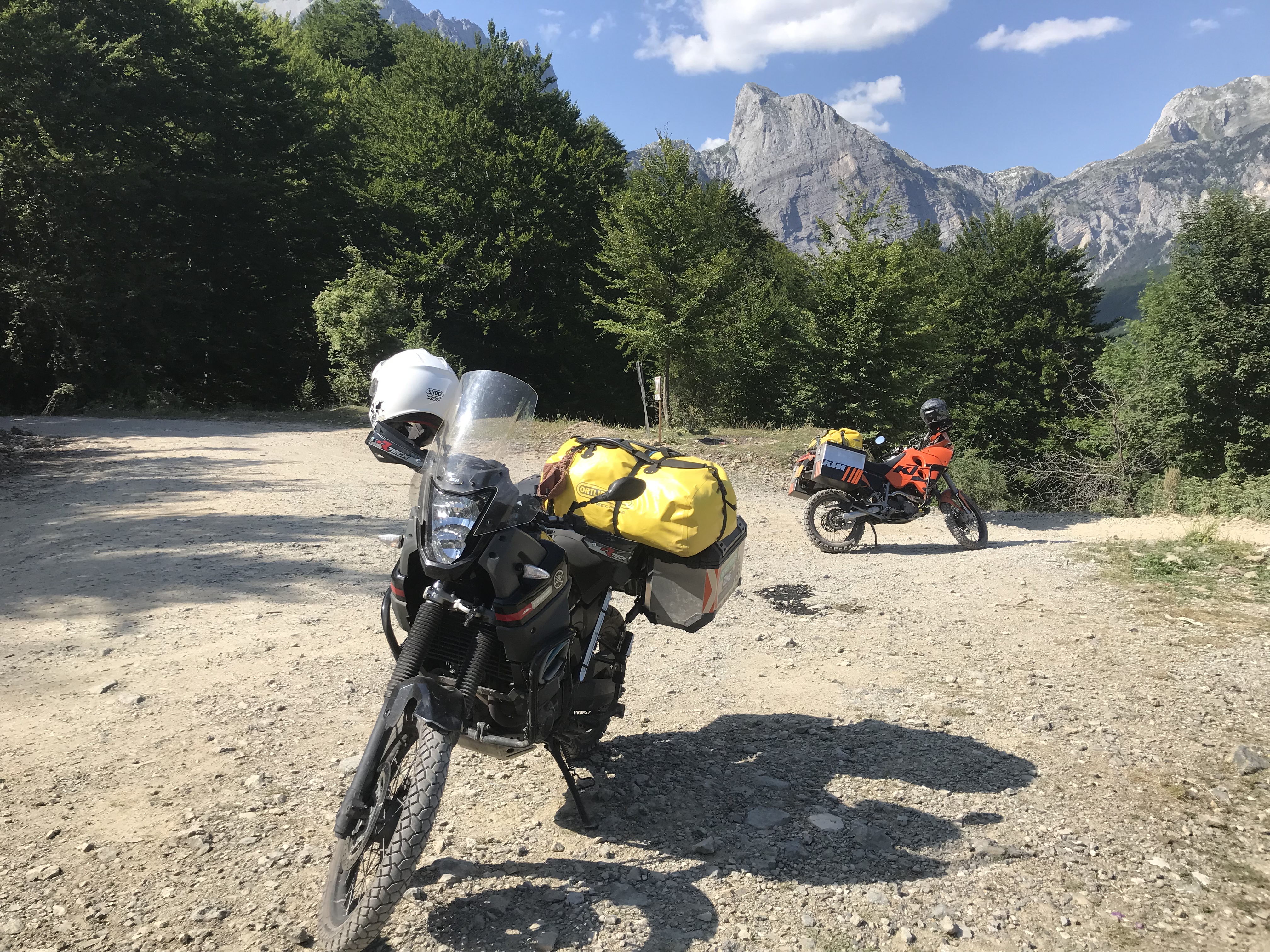 Back to the Albanian mountains. Because the road ended. 17 kilometers in front of Theth the asphalt was done. We decided to give it a try, though we were a little scared of what the road after Theth might look like. We gained some experience in the north of Italy, and that first part was comparable to the track we followed there. After Theth the stream of jeeps and 4×4 minivans ended. Left alone on a path that challenged us the most until now. It let us up high quickly, with the instability of loose rocks and slippery boulders under our tires. Immediately to our left there was a ravine, so there was absolutely no place for any error. 10 kilometers in we decided to put up our camp. Along an icy mountain river, our pretty little home stood proud. How wild this feels. I thought the trail would change into asphalt in the next few kilometers, but there were about 50 left. Going back didn’t feel like an option, as that too would challenge us and give us many extra kilometers. So we decided to continue.

Before the sun properly rose behind the mountains we were on our way. I knew the danger of it, with our lack of experience and that many kilometers to go. People break all kind of body-parts on tracks like this. And where do you go then, when you’re in the absolute middle of nowhere? Who do you call when your phone has no reception? So I prayed to get us out of this alive. It was a challenge, to feel that bike moving about, to hear its engine roaring when we had to go steep up. I kind of got the feeling for it, my bike and I became more and more one. I found the best passable tracks to maneuver it through and he worked so hard to get us out. We both did. With every stop my body was soaked, heartbeat up high.

I discovered that truly the throttle is your best friend when you’re off-road, though my guts still tell me not to use it too much. It often saved us. When we nearly fell I opened up, bike swinging from left to right to stabilize in the middle, and I felt like only my hands were still attached to it, feet waving in the wind behind my panniers. One corner didn’t end up like that. The road climbed up over big boulders covered by a little stream of water. My rear tire slipped and before I knew it he was upside down. Fuel leaking through the fuel cap, so he had to be upright quickly. But it was impossible to lift on my own. Ruben was up a little further and when I called and whistled for him only a shepherds boy appeared. Unable to communicate in any common language we tried to lift it together. Still no movement. After all Ruben came a little shocked around the corner, though he was happy to see that me and the monster weren’t somewhere down the mountain. With the three of us we were able to lift the beast. I was so happy that that little angel came along. We continued, with adrenaline rushing through our veins. Not much later also Ruben laid it’s bike flat, quite literally as it was so controlled that we didn’t see any damage. Though I enjoyed parts of the track, it was absolutely awesome to make it through together, I’ve never been so happy to see asphalt again. 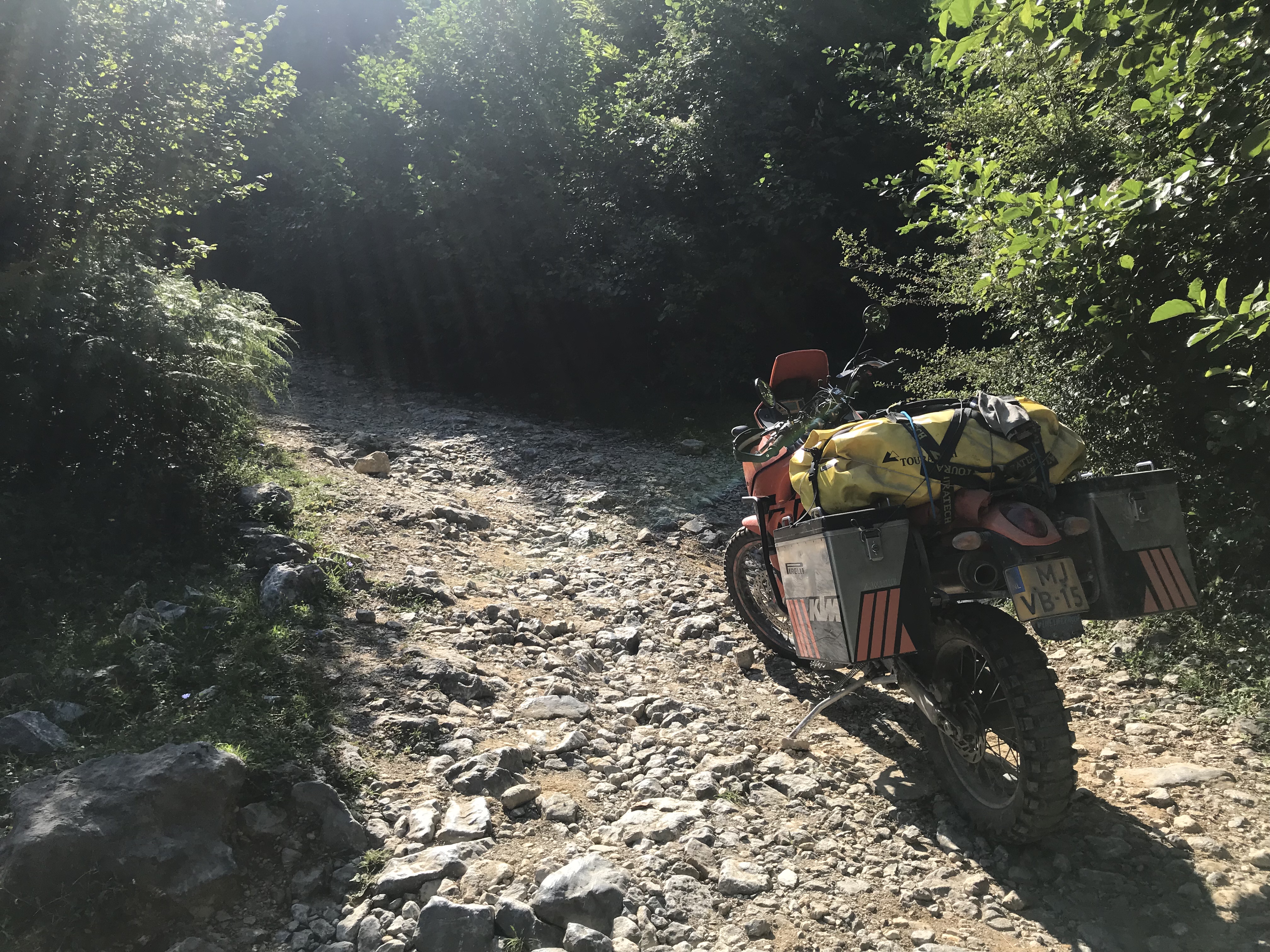 We camped in the backyard of a restaurant of the first few meters of that asphalt, and dove into the so much desired fresh cold water of the creek behind it. Another Dutch guy came out of that same track later that night. He told us that it is part of the Trans European Trail he was following. He nearly broke his leg on this part, and ran into other people that turned around. Maybe we’re not as soft hearted as I thought. It was great to have a beer together, catch up on how life on the bike is going. We started of the next day with the three of us, but as he continued the TET and we were a little done with off-road tracks for now, our ways separated. 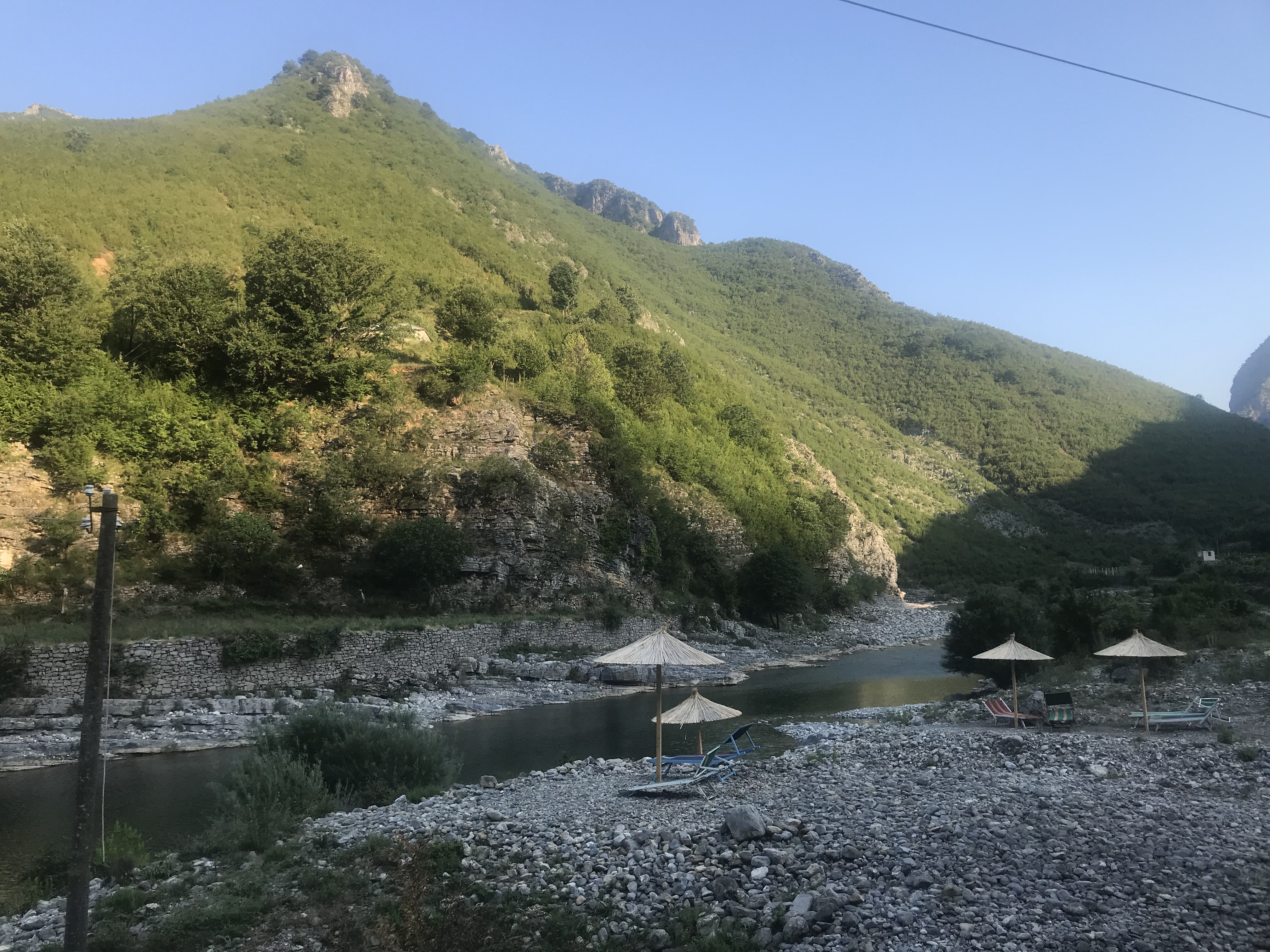 We continued to Macedonia, as Ruben hadn’t been there yet and it was kind of on our way. The way led us through some lush green and lively gorges. How wonderful that we haven’t left all this vegetation behind. I was a little afraid that the forests full of pine and leaf trees were to be exchanged for dry and monotonous stretches of nothingness. But of course, there’s beauty everywhere. It was amazing to feel the fresh air on our skin. Even feel cold a little, though I was happy to remind myself of that feeling later on in the day.

Macedonia was soon left behind as we entered Greece. And here, against all odds, we found a little deserted piece of paradise along the deep blue water of the Mediterranean Sea. We decided to stay for two days, of which one was dedicated to laying in the tent and not being able to hold anything inside me. Yay! First time, and likely not the last that one of us is sick on the road. But well, time is shifting. It is all okay. Luckily I feel better now and we have a whole extra day to enjoy this beauty. 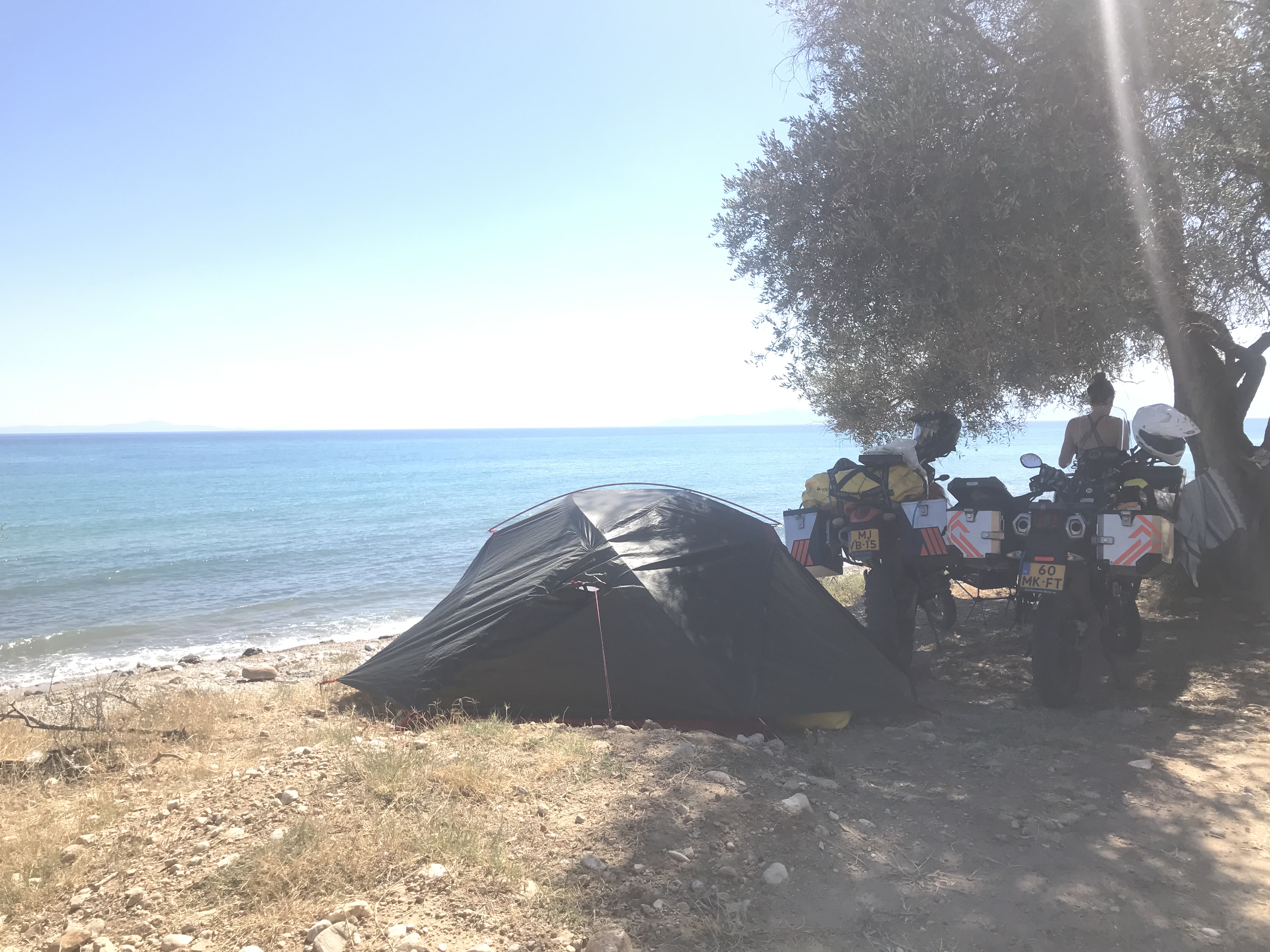 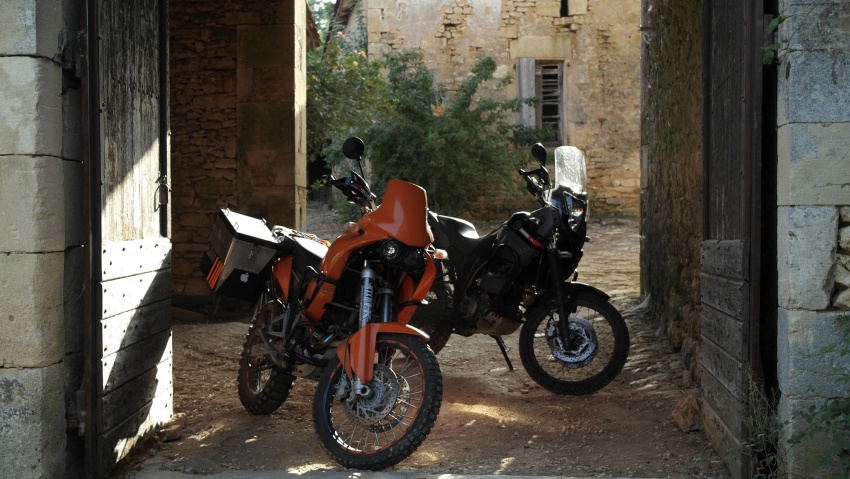 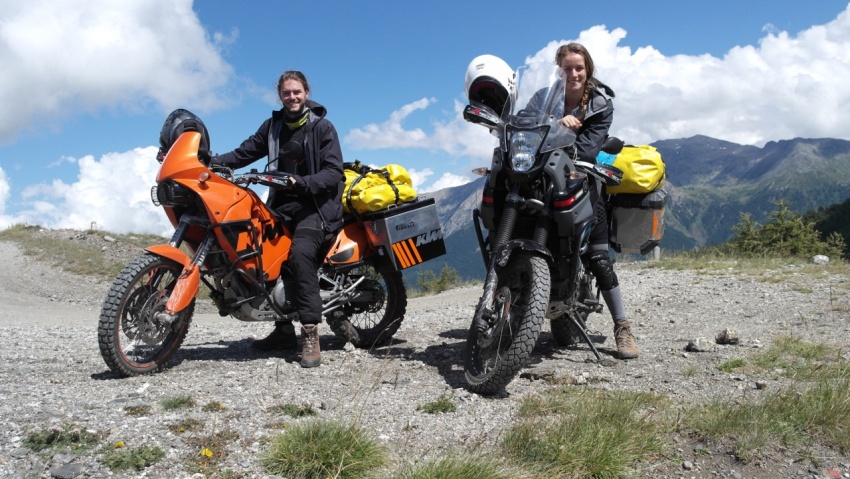